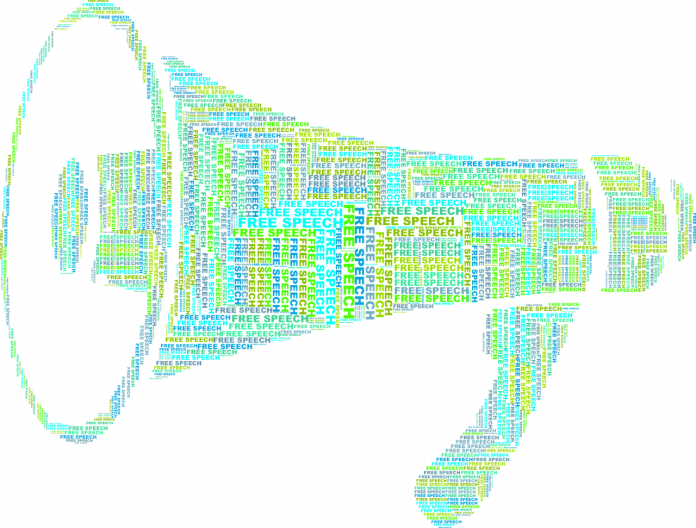 During that fateful moment when a baby leaves the womb, the first thing it does is scream. Representing a microcosm of our existence in this world, it thereby makes clear: “I am here now, and I want something!”

First comes expression, in other words, and after that, our vital intake in the form of food, if we are so lucky. Human wellbeing is predicated on the existence of free expression. One could almost revise the “first principle” of Descartes, “I think therefore I am”, to “I speak, therefore I am.”

JUST IN – EU reaches deal on Digital Services Act for "making the internet a safer space" by requiring social media platforms to more aggressively police their platforms than ever before.

In any case, freedom of speech and inquiry for vast arrays of people is in many ways a recent and modern invention. The last great battle was the long struggle of our Eastern European neighbours against a totalitarian ideology, which in the pursuit of communist “progress” denied the brutally occupied peoples the free word. With great sacrifice, our Hungarian (1956) and Polish (Solidarnosc) friends have torn down the Iron Curtain. With Communism defeated on our continent, the history of oppression of thought and speech was over – or so we thought. Three decades later, the virtues of free expression are being challenged once again. That is a puzzling regress.

It should not surprise to see free speech undermined in Hong Kong, by old foes like the Chinese Communist Party, who have always openly defied this essential freedom. Our Western reaction to this has been meek, but then, frankly, there is not much we can do in the far East, apart from holding up our own way of life as an example. Showcasing that liberty and prosperity can go hand in hand has always been the worst threat to dictators and demagogues.

Perhaps more worrisome are our new foes: Ideologues whose mind-set reminds us of Mao’s Little Red Book and the Cultural Revolution that followed. In the age of digitalisation, a new cultural revolution is currently being pushed, in this case by very few, and very big, private tech companies.

When the EU last introduced regulations within the digital sphere, we were still using the paperless fax machine. Very few people would then have been able to predict how strongly the internet would be a part of our daily lives. It has evolved beyond the scope of private ownership, to something more resembling a public service of general interest, like electricity or water, and should be treated as such. To many, it felt like a real power outage, when Facebook, Instagram and WhatsApp were down for a few hours in October 2021. All of them are owned by a single company. Recently, it bluntly rebranded itself as “Meta”. Maybe “Supreme Digital Over-Lord” may have been more fitting? All of our communication with family, friends, public services and businesses is happening in digital format. Let’s face it: we are totally and absolutely dependent on “Big Tech”.

There are three dangers in this new “Big Tech” world that need to be addressed: monopolies engaging in total surveillance, political bias and zealotry.

First of all, there is a massive concentration of market power. The handful of Big Tech companies cannot be compared with the monopolies of the old industrial age. In comparison, those large oil players look like corner pop-up stores with a single, solitary product. Today, we are faced with total control over the content we can distribute and consume. Immense technological barriers curtail market competition.

Big Tech is not only watching you, but it actively controls and selectively censors what you see. Unbeknownst to most Facebook users, the newsfeed “guided search results” are carefully tailored, to put it mildly. The extent to which this is happening still aroused astonishment, when Facebook whistle-blower Frances Haugen testified about this to the European Parliament in November 2021. Powerful algorithms are creating artificial bubbles of advertisements and news, carefully designed to let one click lead to another click, in order for you to spend more time and money on the platform. We are actively feeding these platforms with a staggering amount of data, only to be manipulated by what they gather from us. The result of this is a massive and dangerous distortion of truth, in the pursuit of, still mostly, commercial interests.

Secondly, these private actors are not bound by the rules which Constitutions lay down for state actors. Instead, they pursue the wanton interests of their very few owners, including their overall political agenda. Strong, undeniable tendencies to ban certain ideas can already be identified.

At the same time, there are still old acquaintances, like the Chinese communists or Russian troll farms, that shamelessly interfere. We can see how murderers and those calling for murder, like Venezuelan President Nicolas Maduro, are allowed to rant on endlessly, not to mention the Islamo-fascist regime in Iran, which incessantly cries for the destruction of Israel.

We also witnessed U.S. President Donald Trump’s lifelong eviction from Twitter. Even former German Chancellor Angela Merkel „considers it problematic that the president’s twitter accounts have been permanently suspended“. Indeed, there were several accounts. Not only his “realdonaldtrump” account was taken down, but also the official account “potus”, reserved for the democratically elected head of state of the United States of America.

Furthermore, “Parler”, an alternative platform, was thrown out of the app-stores of Apple and Google, and even completely taken down by digital service provider Amazon. The Russian human rights activist – himself deleted by Meta and Twitter – Alexei Navalny commented: “I think that the ban of Donald Trump on Twitter is an unacceptable act of censorship” which “was based on emotions and personal political preferences”. Not much needs to be added there.

Additionally, organizations that specialize in labeling illegal content have to get priority status for their complaints. Notably they call these services “trusted flaggers,” entities which are appointed by the government to flag problematic content. What could go wrong? pic.twitter.com/gOqkhZ3xiH

Third of all, there is the strong influence of new ideological zealots, particularly militant interest groups (e.g. “woke” groups): Aggressive “identity” supervisors whose perverted over-simplified interpretation of post-modernist concepts, a kind of “Foucault-on-speed”, distorts the political and legal landscape.

They purport to act with “best intentions”, claiming to merely want to protect particular vulnerable groups and sub-groups that could be offended by “harmful content” or “disinformation”. This may sound harmless, but their actions are a gateway to more than censorship. After their free speech is “cancelled”, victims of the woke mob also often have their livelihoods wiped out, all for the blasphemy of stating plain scientific facts, as for example “the human species has two sexes”, or the use of terms like “mother” and “breastfeeding” (sic!).

French Minister for diversity Élisabeth Moreno has observed that the “cancel culture” “kick[s] out people from ongoing debates because they think otherwise.” Many businesses, from newspapers to plumbers, are adjusting their operations accordingly, with IKEA being a salient example, retracting their ads following a tirade of woke outrage. To his credit, French President Emmanuel Macron has vowed “I am not going to give in to the ambient madness”, warning of the palpable dangers of “puritanical [cancel] culture”.

These three dangers were supposed to be tackled by the EU’s new Digital Services Act, but it is doubtful that this is the case. Danish EU Commissioner for the Digital Ag Margrethe Vestager has stated the function of the new legislation was “to make sure that we as users […] [can use] a wide choice of products and services online as we do in the physical world”. On the Digital Markets Act (DMA), she commented that the purpose was for businesses to “freely and fairly compete online just as they do offline because this is one world”. Online marketplaces, social networks, content-sharing platforms, app stores and online travel and accommodation platforms to be regulated by the DSA, and “gatekeepers” by the DMA, with supposedly transparent and clear rules – something which would be a first – and swift methods of sanction.

Troubling however is the fact that free expression is completely out of focus here, whereas this should be the focus. The risks cited by the European Commission sees are primarily “the spread of illegal content and activities” and only in last order “limitations to express themselves”.

It is clear that some content should not be distributed, but what we saw with the German Network Enforcement Act (Netzwerkdurchsetzungsgesetz) is the enormously chilling effect this had in Germany. Facebook & co engage in pre-emptive compliance, by adapting general terms and conditions, thereby reaching a removal quota of 100% of flagged content in one survey in 2017.

Tech companies already naturally suppress content and suspend user accounts, and now they will do so more, as a result of heavy and swift fines provided for by the DSA. Arbitrary legislative categories like “harmful” or “undesired” will open all floodgates, as history teaches us.

Everything that is legal offline should also be legal online

Our freedom should not be allowed to rest in the hands of ambient ideologues, nor in the hands of the comprised Big Tech companies, but, obviously, only in the sound hands of judges, who should have to adjudicate online just as they do offline, according to the respective legal traditions. Everything that is legal offline should also be legal online.

Within the digital world as well as in the physical world, the benchmark for every new piece of legislation should be, “does it promote freedom?”. That is a question which many fellow MEPs seem to have forgotten. Europe is the continent of The Enlightenment, so let liberty shine. In the face of old and new totalitarian threats, we must opt for freedom.