Home European Union “The big state is making a comeback at the EU level” –...
Twitter 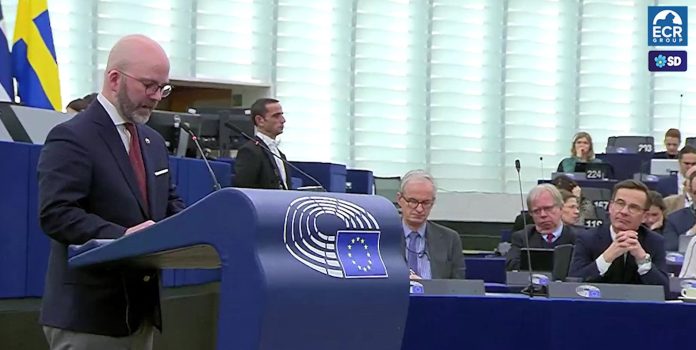 Speaking in the European Parliament, Swedish MEP Charlie Weimers (ECR – SD) addresses Swedish Prime Minister Ulf Kristersson (EPP – M), who was on a visit to the EP in Strasbourg to discuss the priorities of the Swedish EU Council Presidency. During his speech, Weimers delivered some home truths.

Big 🇪🇺 government & massive € spending is on the rise!

I asked @SwedishPM Kristersson to pick up Bohman's mantle & join @sdriks in standing up to big government in Brussels. pic.twitter.com/GDXNJusY9y

One thing we have in common is a respect for Gösta Bohman‘s political work. His fight for individual freedom and against the big state.

Now the big state is making a comeback at EU level.

You know that Brexit did not lead to the necessary soul-searching in Brussels. That the centralists saw their chance.

You know that when power moves to Brussels, it never comes back.

You know that the EU’s regulatory burden is growing.

You know that the EU is regulating more and more of citizens’ lives.

the principle of subsidiarity is supposed to limit the transfer of power. Crisis after crisis is being used to shift more power to Brussels.

The EU was supposed to promote free trade and fight protectionism. Instead, protectionist ‘green investment subsidies’ financed by loans like the ”Covid Fund” are proposed.

We were supposed to keep our labour market model. That didn’t happen either…

To this, we can add EU policies on forests, hunting, energy, fuel, quotas, migration and asylum.

If you don’t learn from your mistakes, you are doomed to repeat them.

In Sweden, the Moderates have – at last – adopted a realistic migration policy.

However, your party has essentially accepted EU Migration Commissioner Ylva Johansson’s proposal to give Brussels power over migration numbers.

Because even if your stance means that you can pay your way out of accepting Brussels’ migrant quotas, it involves paying fines in the billions in order to pursue an independent migration policy.

Such an obligation – that the government can be fined up to 20 billion to keep its election promises – should be horrifying.

In addition, we know that the migration pressure will increase. One only has to look at the population forecasts for Africa and the Middle East. Frontex is now sounding the alarm about the biggest illegal migration since 2016.

Do not give up power over migration numbers.

Down here, the big state is growing. The ”Covid Fund”’s financing with common debt is now a precedent. Those sitting here today – from the left to your own EPP party group – are demanding more debt, new EU taxes and more transfers of power.

When will the Moderates draw conclusions from this?

Gösta Bohman fought for what he believed in. You can do the same.

I am convinced that many of your voters would appreciate Swedish threatening a veto against indebting future generations and a referendum lock that gives the Swedish people a say on the planned transfers of power.

More people than you think would welcome a change of course from the United States of Europe to safeguarding individual freedom, corporate competitiveness and Swedish sovereignty.