Peace as a logical consequence of trade

The long history of European integration is the slow and usually costly triumph of trust over suspicion. It is the process of rapprochement between members of different nations that began to understand that cooperation is the most dignified and the most efficient way of living together, after centuries of disputes and confrontations.

The mutual trust Europeans have come to adopt follows from what French economist Frederic Bastiat stated: “When Goods Don’t Cross Border, Soldiers Will.” That is, the adoption of commerce as an antidote to the law of the jungle, to chaos. The adoption of the trade of goods and services, of their cross-border transit. Also, of the transit of the inhabitants of Europe. And, although we tend to ignore it, above all, the free movement of ideas that has facilitated the expansion of enlightened thought as never before.

Progressively, always considering the establishment of the European Union in 1992 as the epitome, goods, people and ideas have basically been crossing borders within Europe with the same ease as moving between two neighboring provinces. This has made us feel that it has always been this way and has lead us to wish that it never stops being so.

Experience confirms Bastiat’s phrase in a positive way: when goods cross borders, even more, when citizens and ideas also do so, soldiers remain far from them, in the barracks. Peace is a logical consequence of trade. In that order, and not the other way around.

Opening up to the world

If the EU is the most obvious sign of the triumph of trade, of confidence, over strength, it is natural that the European common market opens to the world, very much like the boldest countries did on their own during the industrial period, convinced about the superiority of exchange over autarky. This economically speaking, yes, but also socially. And morally, after all.

Therefore, debates and votes on Free Trade Agreements between the European Union and states or supranational entities have become a common practice, both in the European Parliament and in national Parliaments, given that some agreements require ratification by member states, in accordance with their constitutional requirements.

A recent EPICENTER research paper, called “Raising Barrier, Transforming attitudes to trade in Southern Europe” takes a closer look at the political positions of every political party in Greece, Italy and Spain regarding all of the sixteen FTAs or Association Agreements negotiated and concluded between 2012 and 2019, of which only three did not require approval from national parliaments.

How can the benefits of free trade be better articulated in the democratic process of Southern European countries? https://t.co/tRIEKt8SXQ

Although the benefits that freer trade brings to an economy are widely accepted and demonstrated, trade liberalization is often strongly resisted by political parties and interest groups across the political spectrum all over the World. Of course, also in Southern Europe. However, the voting patterns of political parties in the national parliaments of the three Mediterranean nations investigated, and of their members of the European Parliament, demonstrates certain similarities, including a tendency for parties in government to support free trade agreements and those in opposition to resist them, whatever their political orientation. In opposition, support for international trade liberalization is considered to carry political risk.

It is possible to discern a correlation between the opposition to FTAs and the classification of certain political parties as ‘authoritarian populist’ – according to the definition of the Timbro Authoritarian Populism Index , although the picture is mixed. Also, there are often differences within political parties and inconsistency between how their representatives vote in the European and in national parliaments. Surprisingly enough, the evidence shows that some parties considered populist in reality strongly promoted agreements to open up trade. 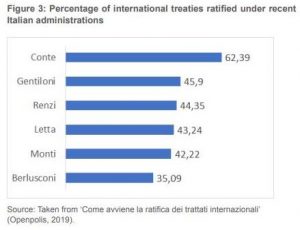 Nevertheless, political parties in all three countries surveyed have exploited populist concerns in relation to jobs and the environment and are considered to be susceptible to lobbying by vested interests. In that respect, the research paper identifies the issues that are often cited as grounds for opposing FTAs.

"Incentivising the EU’s members to prioritize the long-term benefits of trade, rather than just focus on short-term, selective losses is important if the EU wishes to remain an important global economic force." @Constan99757629 writes for @New_Europe https://t.co/BsMG56f0vm pic.twitter.com/xrhs0kc7zN

All in all, the framework of the European Union has successfully contributed to a path towards a peaceful coexistence based on trust, of which trade has always been a root cause. Truly, the health of trade within the EU and with the outside world therefore preserves the health of European coexistence itself.