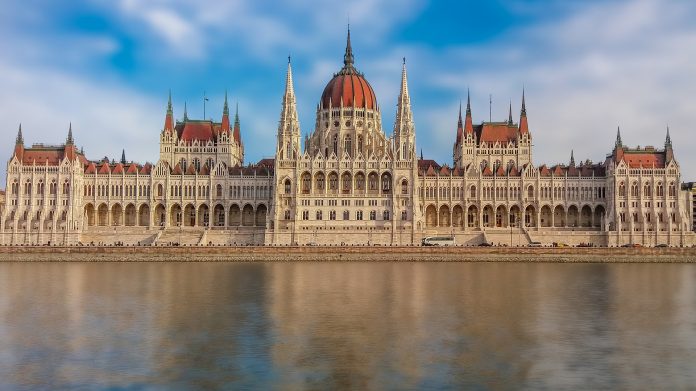 By György Schöpflin, a Hungarian academic and a former Member of the European Parliament (Fidesz) and currently a Senior Research Fellow at the Institute of Advanced Studies Kőszeg, iASK.

In Hungary, the primary election for the left’s prime ministerial candidate resulted in victory for a self-described conservative and practising Roman Catholic, Péter Márki-Zay, mayor of a town of 46,000 in southern Hungary. Márki-Zay has won through an extraordinary surge of votes, mobilised because of his personal appeal, as he does not dispose of a party organisation of his own. The consensus is that he has remarkable personal charisma and is able to enchant crowds. At one rally, one of his supporters held a placard saying, “be my father”.

Peter Marki-Zay, a conservative small town mayor, was such a long-shot to win Hungary’s first-ever national primary that supporters had set up his victory speech at a craft beer pub. He is now the face of the opposition against PM Viktor Orban. @mdunai https://t.co/lJaU956OV4

Márki-Zay’s black swan victory over the Democratic Coalition’s (DK), the communist successor party’s Klára Dobrev, the wife of ex-PM Ferenc Gyurcsány, was convincing – by 57 to 43 percent. Memories of the Gyurcsány government in the 2000s are bleak.

A closer look at Márki-Zay

All of this demands deeper investigation. First of all, a little less than 10 percent of all Hungarian voters took part in the primary, which indicates that there is a motivated minority that wants change after Fidesz’s and Viktor Orbán’s decade of power (since 2010). The strength of the anti-Fidesz sentiment in the country is another matter. The polls (that aren’t as reliable) have Fidesz and the Opposition neck-and-neck.

Secondly, Márki-Zay’s implicit message is “neither Fidesz, nor the DK”. This means a serious, possibly insoluble contradiction, Márki-Zay needs the votes of the left to succeed in next April’s parliamentary elections, even while many of his supporters consider the DK to be as undesirable as Fidesz. A split in the United Opposition cannot, therefore, be ruled out.

Thirdly, arguably, there are anti-political, anti-elite elements in Márki-Zay’s mobilisation. There are those on the left who would certainly call it populism, but anti-Fidesz populism doesn’t count or so it would seem.

In any case, six months is a long time in politics and Fidesz has said nothing so far about Márki-Zay’s challenge. The counter-strategy has yet to be elaborated.

Furthermore, even if the Opposition does hold together and wins the elections, there is no guarantee that the DK will honour its promise and elect Márki-Zay as PM. Unless between now and April, Márki-Zay builds a party to take part in the elections, he will have no MPs. But if he were to do that, he would be taking on both the left and Fidesz and likely split the anti-Fidesz vote.

If Márki-Zay simply coasts along in the belief that he can be the left’s man, then those of his supporters who like his “neither Fidesz nor the DK” platform could well have second thoughts. That’s one of the problems with mobilising by charisma – the support could easily evaporate, especially as Márki-Zay has (as yet) no institutional base to sustain it.

The teflon side of things is about the United Opposition’s programme and Brussel’s reception of it. In simple terms, Márki-Zay and the left want to dismantle as much as they can of what Fidesz has put together. Both Márki-Zay and Dobrev have stated that they want to abrogate the 2012 constitution – Hungary’s Basic Law – if necessary with a simple majority. This flies in the face of everything we recognise as conforming to the rule of law. Constitutional change needs two-thirds majorities. Even if the Opposition should win, a two-thirds majority is inconceivable.

Dobrev is par excellence establishment figure, MZP an outsider. Dobrev is left-wing, MZP a conservative. But they both pledged to upend the Fidesz-era with radical measures, incl voiding the Constitution (Karacsony, a man of compromises, never went this far).

Furthermore, if successful, the Opposition would immediately imprison various high officials, like the public prosecutor, as enablers of Fidesz’s “corrupt” system and investigate those who have run the economy as dubious Fidesz “cronies”. If necessary, the left would mobilise the street. This looks suspiciously like preparing for a colour revolution. But in the EU?

Indeed, what has been by far the most striking factor in the context of Hungary’s politics has been the utter silence from Brussels. This applies to the EU, to the mainstream media and equally to the NGO and think-tank world. Imagine if a centre-right force were to announce dumping the constitution with a simple majority. The howls of outrage would resound round the globe.

Still, this silence, though entirely at variance with the EU’s normal stance on rule of law issues, can be explained by the Hungarian opposition’s position on the EU – basically whatever it is that Brussels wants, the answer is yes. As a result, there are no howls of outrage when pro-EU forces plan to breach the rule of law. Dobrev, vice-president of the European Parliament, supports a “United States of Europe”.

When it comes to Fidesz and Orbán, things are different. Such is the detestation of a successful national conservative government that senior politicians lose all discretion. Mark Rutte, the Dutch prime minister, has spoken of forcing Hungary “to its knees”. Katarina Barley, the socialist vice-president of the European Parliament, wants to “starve” Hungary (and Poland). Irritatingly for the Euroleft, Fidesz has, in fact, been successful economically. GDP per capita has more or less doubled since 2010. And that may well be the central problem in the left’s eyes. Fidesz’s semi-etatist, semi-corporatist system, not unlike the UK in the 1970s, has done fairly well, though there’s a long way to go when it comes to inequality.

In a wider perspective, this detestation of Fidesz and Orbán personally demands an explanation. Success is one factor. Ignorance of Hungary is another. The mainstream media have refused or proven incapable of publishing a detached assessment. A side-swipe at Orbán is obligatory if a journalist wants acceptability; indeed, editors have been known to cut anything putting Fidesz in a favourable light. The impenetrability of Hungarian doesn’t help either. And Hungary’s leftwing media – yes, contrary to stories of press unfreedom, this does exist – invariably gives whatever Fidesz does the most negative possible reading. Western media simply echo this.

Maybe a part of the explanation for this no-holds-barred approach to Hungary is that the EU has never really troubled itself to “learn about” Central Europe. Tiresomely, they are European, but their Europeanness is seen as deviant. No wonder that the European left would love to see Orbán toppled and, if that’s the price, would be prepared to overlook things like abrogating a constitution with a simple majority.

My interview for @demokracija1, thoughts on democracy, the EU, Central Europe https://t.co/oqKMh8u2Wl