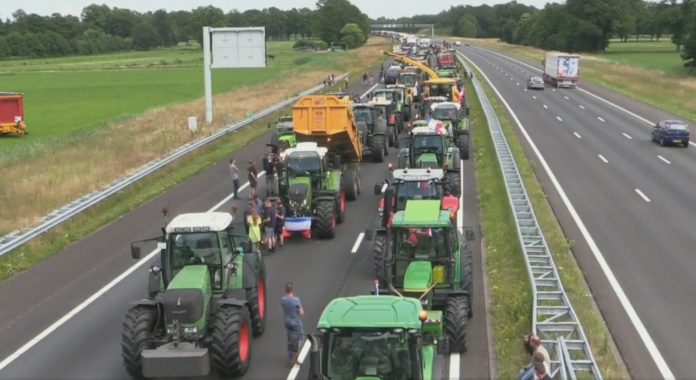 Large-scale farmer protests have erupted in the Netherlands against the Dutch government’s nitrogen reduction targets, which result from European Union rules on reducing nitrogen pollution. The government plan aims to halve nitrogen output by 2030 and foresees that some Dutch farmers are forced out of business, which the government intends to compensate by spending up to 25 billion euro of taxpayers’ money.

In an analysis, Dutch academics Adriaan Schout and Paul Hofhuis note that the Netherlands is locked in as a result of the designation of 162 nature areas as “vulnerable”, due to an EU directive.

Paul Hofhuis is a senior research associate at Instituut Clingendael.

The Dutch government is struggling with the emission of nitrogen emissions from agriculture, traffic and industry. As a result, investments in construction and infrastructure have been put on hold. The government has budgeted 25 billion euros to buy out farmers and to use innovation to reduce nitrogen emissions from livestock farming. This amount is about the same as the annual turnover of the entire Dutch hospitality sector. Yet it is far from sufficient to persuade farmers and to tackle the damage caused by other economic activities to nature reserves. A solution that will finally bring the Netherlands into line with EU environmental regulations is not in sight.

The Dutch nitrogen policy is an elaboration of the EU’s Birds and Habitats Directives of 1979 and 1992. The Netherlands has designated 162 nature areas as unique and vulnerable, registering them with the European Commission. This means that the quality of the nature and the diversity of plants and animals in those areas is not allowed to deteriorate.

This has major consequences for the economy. In the Netherlands, there are stories about officials that have been way too ambitious in designating these 162 areas, but those are not true. The Netherlands was simply ahead in the implementation of EU rules requiring the designation of vulnerable nature areas. With those maps, the European Commission has been able to force the Netherlands to designate such an ambitious number of large and small areas.

Political turmoil in the making 👇

'The country’s goal to halve nitrogen output by 2030 will force some Dutch farmers out of business, according to a government plan… Hundreds of farmers gathered in The Hague on Tuesday accompanied by two cows.'https://t.co/Jha9OQ1fCL

The 162 areas saddled the government with two problems.

First of all, during the designation, ecology has been prioritized in a one-sided and technocratic manner. Feasibility and other interests were seen as secondary. As a result, the EU’s policies were really doomed to fail from the start, given the intense nature of the Dutch economy.

Secondly, over the past twenty years, Dutch governments have become less and less concerned about nature and environmental problems. With postponements, requests for flexibility, sham solutions and the non-fulfilment of promises, attempts were made to pretend that implementation of EU rules was progressing. The hope existed that innovation, extra EU subsidies and some European leniency would solve the problem. The nitrogen challenge really teaches us a great deal about great EU ambitions and national obstinacy.

The Netherlands tried to creatively compensate the poor quality of nature in one area with good quality elsewhere. However, the judgments of the European Court of Justice and the Dutch Council of State in 2019 put an end to the Dutch dream of flexibility when it comes to EU environmental rules. The Netherlands had to get serious, but the 25 billion is too little, while the incentives for farmers are insufficient and democratic support is lacking.

A pragmatic and a rigid EU

It seems as if there are two European Unions: a pragmatic one and a rigid one. The Eurozone is an example of the pragmatic EU, where rules are constantly being interpreted politically and where hardly any legal enforcement exists. The Netherlands rightly has great difficulty with this lack of EU supervision. EU nitrogen policy represents the other extreme, with enforcement to the letter. The Netherlands has problems with the latter as well, because it is impossible to reconsider which interests should prevail again as time goes by. Sensible rules require strict enforcement, but also regular review. It should be possible to adapt political choices to new insights, circumstances and preferences.

With the EU’s nitrogen rules, democracy has sidelined itself. The 162 vulnerable nature areas have been laid down ‘definitively and irrevocably’. The Netherlands and the rest of the EU have not thought through these policies properly, while underestimating the long-term effects in other areas. Without a review of EU environmental policies, the Dutch 25 billion euro budget is an emergency measure that will only have a temporary effect. At the national level, it may be possible to come up with half-considered policies, given how it is possible to adjust policies continuously. Decision-making at the EU level however requires much more care than at the national level, because revision is much more difficult or almost impossible.

Dutch farmers closed the border between Holland and Germany using tons of MANURE. They call for politicians to stop closing down farms to reduce nitrogen emissions. Take a look:pic.twitter.com/GEXILY9jNr

The solution to the Dutch nitrogen crisis is to changes EU rules. However, the European Commission isn’t open to changing the rules just like that, because the Netherlands now has a bad reputation when it comes to nature preservation. In addition, the Commission does not want to offer other countries the opportunity to discuss environmental issues.

The Netherlands should therefore, first of all, come up with an ambitious plan about what is currently possible when it comes to environmental policy. It is advisable to combine the Dutch 25 billion nitrogen fund with the 35 billion euro earmarked by PM Mark Rutte’s coalition for the climate and energy transition. These problems are closely linked. They are also an integral part of the «European Green Deal» of EU Climate Commissioner Frans Timmermans.

We are not suggesting to cut back, but to develop coherent environmental and climate policies that are feasible, which also address political priorities and enjoy popular support. An integrated approach means that the Dutch coalition agreement must be renegotiated. The fact that there currently are two separate budgets and to ministers responsible is something which is hampering coherence.

Furthermore, the Dutch government needs to deploy a strategy at the EU level which is supported by other Member States. For allies, regions with similar problems come to mind, like densely populated Flanders, the French Rhône Valley, as well as areas in Germany, Denmark and Northern Italy.

A European strategy also requires a European story. The EU’s grand «European Green Deal» threatens to end up in the same way as the EU’s stalled nitrogen policy. Negotiations in Brussels on this are once again characterised by a technocratic approach. Here, too, there may be far-reaching economic consequences while we can witness similar problems with support and enforcement.