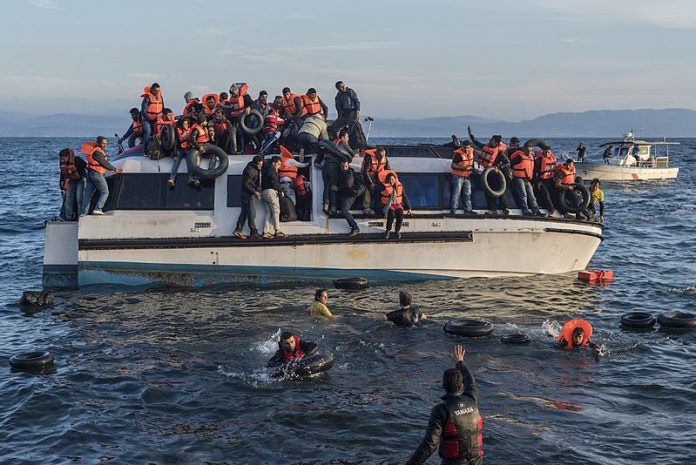 By Omar Makram, a Swedish-Egyptian commentator

Europe has a weakness, which is being exploited by hostile neighbours. That weakness is its asylum system. Turkey’s Erdoğan has often used asylum seekers and migrants as a weapon, to extort money from us, or to make us refrain from criticising Turkey and its leadership. In retaliation for EU sanctions, Belarus is doing the same, whereby it allows migrants, mostly from the Middle East, to fly to Belarus, in order to be taken to the border with Poland. There, the migrants attempt to cross the border, but they are prevented from doing so by Polish border guards, while they are being prevented to return to Minsk by the Belarusian military as well.

What is happening now, is a tragedy whereby vulnerable people, including women and children, have been tricked into chasing a dream, while paying large sums of money, only to be used as instruments in a hybrid war.

Security forces on the Belarusian side are behind the migrants.
The migrants are in effect trapped.
Screenshot: @XSovietNews pic.twitter.com/q97f5GIO56

Judging both from the few that have been interviewed and from the previous migration waves in recent years in Europe, the thousands of migrants at the border do not see Poland as their destination, but instead countries like Germany and Sweden. Some voices have been raised in Sweden in support of letting them in, but a majority of Swedes seems to be against repeating the 2014-2015 refugee crisis.

In a tweet about the current crisis, journalist Hynek Pallas, writes:

“The EU’s best weapon against a dictator? Showing that inhumane methods do not work with a humanist democracy. Refugees are only live ammunition as long as they are allowed to be weapons. If the EU would say it would accept and process their applications, Lukashenko’s threat would soon fall flat.”

However, it is not difficult to foresee the consequences of opening the borders. The people that would be welcomed in, would contact their relatives and friends in their home countries, and urge them to follow suit. In all likelihood, this would cause huge new migrant flows into Europe and we would be back to the same unsustainable situation we witnessed before. We would have a chicken race which Europe can never win, and both Europe and Belarus know that.

"Until it sorts out its migration policy, the EU will be at the mercy of its authoritarian neighbours"
New article, by @rgtyler:https://t.co/dYdgmhIvXs#EU #Belarus #Migration #Lithuania #Russia #Iraq #Turkey

Three years ago, I had one of my least successful dates ever. We had decided to meet in a bar, and at first the atmosphere was nice, until we started discussing the political climate in Sweden and Sweden’s asylum policies. She, a Swedish woman, and I, a refugee from Egypt, found ourselves on opposite sides of the issue. She thought that Swedish asylum policies were racist and that Sweden should not control the border with Denmark, that we should let all asylum seekers in. In principle, she argued for open border policies.

I replied that I thought there was a point in having restrictive asylum policies at the moment, because Sweden has received disproportionately large numbers of asylum seekers and refugees, both compared to other European countries and in relation to the size of the country’s population. I also said that I believed that Sweden needed to integrate the people which it had welcomed before better, and that it had a responsibility both to the people it had welcomed before and to its own citizens.

She looked at me with anger visible all over her face and said: “You are ungrateful!! You are a refugee yourself! What would you have done if Sweden’s doors were closed when you came here?!” I thought her reaction was strange, partly because it is precisely because I am grateful that I care about what is good for Sweden and its people. I answered her: “It’s no big deal, I would have applied for asylum in Germany, Denmark or the Netherlands. Sweden is not the only country in Europe.” I probably don’t need to tell you that there was no second date.

Then, I didn’t always think along these lines on this topic. In fact, I used to take the opposite position, and I was basically in favour of open borders. However, this was when I had just arrived in Sweden and before I had come into contact with the reality of the country, and before I had any idea of the integration challenges Sweden is facing.

However, in the end, I came to the logical conclusion that there is a strong link between migration numbers and successful integration, and that a country should not have levels of migration exceeding its capacity to integrate those that arrive. Generous migration and asylum policies might have worked if Sweden was not a welfare state, but open borders and a welfare state do not go together.

The current asylum system is deeply flawed, unsustainable and urgently in need of reform.

First and foremost, it favours human traffickers and causes vulnerable people to fall victim to them. It also puts people’s lives at risk, because it forces them to undertake a risky journey, whether they try to cross the sea and drown, or whether they get stuck at the border and die of cold or hunger.

This asylum system is also discriminatory, because a majority of those who are able to make this journey are healthy and young men that have enough money to pay the smugglers. It excludes many women, children, the disabled and the elderly, who cannot or dare not make the same journey. It is perhaps unnecessary to also point out that this system is far from feminist, as it disproportionately favours men, and as a significant male surplus generates its own problems in terms of social destabilisation.

Both Sweden and Europe as a whole need new asylum policies that are more balanced and sustainable and that guarantee safe passage for refugees. Policies that are also sufficiently pragmatic, so available resources are used in the best possible way.

The money spent on welcoming refugees in Sweden would do much more good if it were spent on receiving more refugees in areas close to their countries of origin. This could, for example, involve greater financial support to countries such as Lebanon, Turkey and Jordan, countries that receive many refugees. UN refugee camps are also in dire need of financial resources.

Then, it is also true that people in refugee camps need to be resettled and that there is a demographic limit to how many refugees neighbouring countries can take in before they are completely saturated. Therefore, Sweden needs to move completely to a quota system, proportional to Sweden’s population.

That quota system could take in people from UN refugee camps, perhaps combined with opening up to accepting asylum applications at embassies abroad until the quota is filled. This quota system should give priority to the most vulnerable groups, i.e. women, homosexuals and persecuted religious minorities and atheists.

However, since Sweden has received disproportionately large numbers of refugees in recent years, Sweden’s quota will be filled for a long time to come. It is therefore reasonable that if Europe were to receive more refugees, other European countries should be the ones to receive them, and not Sweden.

If Sweden had the same population as Germany, that number would be 1.4 million. So, per capita, Sweden took almost twice as many asylum applications from children as any other EU country. pic.twitter.com/kSQy8uDdGe

Sweden also needs to cooperate with the countries from where the migrants come, and via its own embassies in these countries, it should spread information that it is not possible to obtain a residence permit in Europe by trying to cross the border into Europe, or by crossing the sea. This to avoid that people do become victims of hybrid wars or of exploitation by traffickers, in pursuit of an unattainable dream.

For those that do manage to reach European territory and apply for asylum, it might make sense to bring them to asylum centres in safe third countries, and allow them to remain there during the period when their asylum claims are examined, after which they can be resettled and counted as part of the quota if they are found to have valid reasons for asylum.

A reformed asylum system needs to be put in place urgently, to eliminate Europe’s vulnerability to neighbouring dictatorships and to protect Europe from the ongoing instability in the Middle East and parts of Africa and Asia, including Afghanistan, where the situation risks triggering a new refugee crisis in the near future.

We need a fair, gender-balanced, safe and sustainable asylum system as well as responsible asylum policies that take into account the capacity of the country and its system. Utopianism is dangerous. To do good, one must not only have the intention to do good, one must also have the will and ability to make good happen.

That is certainly not something which can be achieved with open borders in the context of a welfare state. That’s why we need to hold the line.

Originally, this article was published in Swedish, on Swedish website Bulletin