Home European Union Macron is not about to replace Merkel at the helm of the...
Twitter

Following the upcoming German elections, Chancellor Merkel’s era will come to an end. In addition, from January 2022 and for six months, France will be taking over the Council Presidency of the European Union, propelling French President Macron to the driving seat.

However, a recent poll by the European Council on Foreign Relations (ECFR) shows that Emmanuel Macron is not on his way to gain the stature of Angela Merkel and Germany at the European level. Also with Merkel’s successor, this is unlikely to change.

Merkel is more popular than Macron. Even in France

The ECFR poll covers public opinion in 12 EU countries (Austria, Bulgaria, Denmark, France, Germany, Hungary, Italy, the Netherlands, Poland, Portugal, Spain and Sweden). When asked whether they would vote for Angela Merkel rather than for Emmanuel Macron as Europe’s president, Merkel was preferred in all countries surveyed. 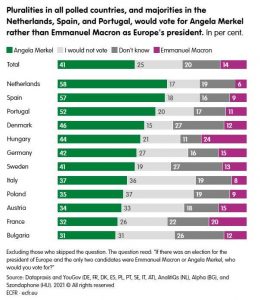 Even in France, the German chancellor would beat Macron, with 32% against 20%. Ironically, the country where the French president would enjoy most support, with 24%, is Hungary, even if also there, 44% would still vote for Merkel. It is not sure whether only opponents of Hungarian Prime Minister Orban are among Macron’s supporters.

In this regard, it should be reminded that when Macron wrote his “letter to the Europeans” in 2019, Macron was criticized by most European leaders, and Viktor Orban was one of the few supporters of Macron’s proposal to start discussions on reforming the EU .

On the other hand, the Netherlands is the country least in favor of an EU presidency for Macron, with only 6% supporting him. Is Dutch opposition connected to budgetary matters and to its position as a member – and spokesperson – of the “Frugal Four”*?

It should be noted that Merkel is popular both among pro-Europeans (48%) and Eurosceptics (31%). This is much less the case with Macron, who’s between 18 and 12% respectively. This is a failure for the man who aspires to embody pro-European sentiment.

Germany remains at the heart of the interests of European countries

The importance of Germany’s leader is not only linked to Merkel’s personality. It goes deeper. According to the poll, economic policy is the main area in which Europeans trust Germany to defend their interests.

In a similar way, Europeans also trust Germany to play a strong role in standing up for democratic values. Ironically, Hungary is the country which puts most trust in Germany, with 49% agreeing with the idea that Germany will defend European interests here. It is followed by the Netherlands (45%), Spain (43%) and Portugal (41%).

These results reflect the success of German diplomacy in maintaining good relations with its neighbors. Berlin’s desire to avoid escalating political tensions has strengthened its dominant position in Europe.

Germany’s main strength is its civil society and its industry. The German government prioritises that companies can go about their business, so they can expand to the rest of the EU and beyond. The “Ostpolitik” towards both the Visegrad group and Russia is motivated with economic rather than with political considerations.

This approach is not without its problems, as the controversy surrounding the Nord Stream 2 gas pipeline indicates. Nevertheless, it allows Berlin to be on speaking terms with everyone.

On the other hand, French politics dominates the economy, which contributes to a more centralized approach than the German one. Such an approach can be a source of reluctance for countries primarily interested in business.

Because of this, German political supremacy is likely to continue regardless of who will succeed Merkel. If France wants to be able to compete successfully with its neighbor, its leaders will need to show some more humility again and refrain from trying to impose their grand projects. France would have every interest in playing the role of mediator in European affairs.

This article was originally published in French on Contrepoints.