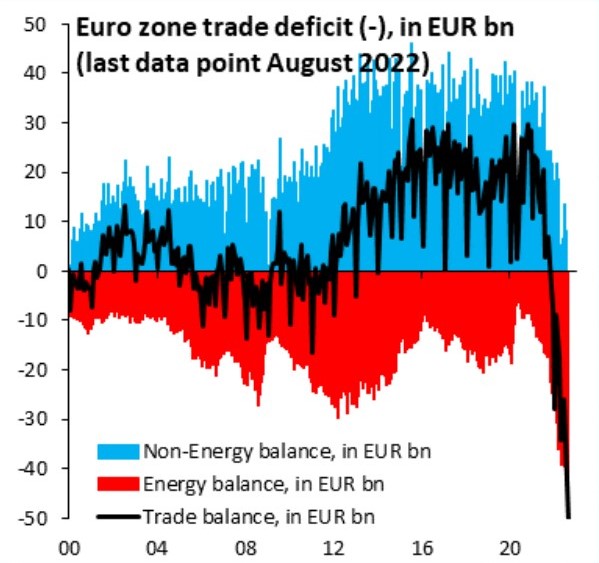 If there is one thing the EU has in common with Spain, which is getting worse by the day, it is the inability to conduct sound economic policies. This is especially the case after its political leadership has adopted extreme climate policies, which have now contributed to an energy crisis.

Back in the year 2000, with the birth of its own currency, it seemed that the EU was going to become a true power bróker, able to impose its will at the global level. In a way this has materialised, at least when it comes to the number of members of the EU and the Eurozone.

From 2015 really onwards, Germany was able to use its position as the motor of the European economy to push through a number of reforms supposedly contributing towards the ideal of a Great Green Europe that would serve as guidance to the rest of the world.

At the same time, China continued to grow steadily, in order to become the second largest economy in the world, surpassing the EU-27 and closing in on the US, which has shied away from the EU’s green economy visions, even developing the world’s largest oil and gas extraction system with “fracking”, something hated, vilified and banned by the greens world.

The UN’s 2030 Agenda for Sustainable Development

One policy goal the EU is committed to, is the UN’s 2030 Agenda for Sustainable Development. This fundamental includes two things: green economic reform and the green cultural struggle, currently known as the “woke” movement.

Green economic policies, on which billions of hours have been spent and billions of euros have been invested, and which taxpayers have been forced to pay for with excessive energy bills for many years, have emerged as a complete failure.

If we had to rely on wind and photovoltaic energy today, we would be freezing to death, eat propellers and ride in cars manufactured in 2000.

To follow this path has been a massive policy mistake and is really closely aligned with the agenda of the radical left, which also has proven to have been financed by Russia.

The situation today is more worrying than we can imagine, not so much because of the cost that citizens are paying for electricity and heating, which has increased tenfold in the last 10 years, but also because we could end up with actual energy shortages.

Despite all this, no heads have been rolling yet at the top of the EU bureaucracy, where the likes of EU Climate Commissioner Frans Timmermansare continuing the work on the European Green Deal, initiated in 2019 by the Von der Leyen Commission.

Due to the energy crisis, the EU and the Eurozone are now facing a gigantic and unforeseen trade deficit.

The Euro zone trade deficit for August was published today. It's a monster. We've never before had sustained deficits of this size. When you're tempted to think the Euro has fallen too much, keep this picture in mind. The shock hitting Europe is massive. Euro will keep falling… pic.twitter.com/5bSwrOgrGB

In August, the European Union of 27, then still lacking the data from Bulgaria, Denmark, Croatia, Hungary, Poland, Romania and Sweden, reached a trade deficit of 48.963 billion euros, which will exceed 50 billion as soon as the data from the missing countries are available.

During the last 12 months, there was only a trade surplus in September of last year; of EUR 2,603 million; and the deficit has now exceeded EUR 287 billion. The expectation is that, as we move into the cold months, Europe is going to have to continue importing gas, much of it produced by fracking, and it is going to have to continue importing oil, when we have closed many thermal power stations and are still questioning the existing nuclear power stations.

'I’m skeptical that Putin can be brought to his knees by simply cutting the petrodollar flow. The same policy didn’t work with Iran & Venezuela, and both countries are much weaker financially than Russia is today.' – @JavierBlas on BBGhttps://t.co/FF75szqEC5 pic.twitter.com/4IxyIVDGnW

To the bunch of incompetents running the EU and its member states, I can only say one thing:  “It is your fault that 440 million Europeans are in this situation.”

We have let them spend senselessly on energy sources that are still far removed from being able to sustain the daily needs of the European production system and the way of life of Europeans. We have let them increase the price of energy, promoting wind and photovoltaic energy, which is much more expensive than thermal, hydroelectric or nuclear energy. We have also paid them without complaining because we thought we were run by professionals who knew what they were doing.

Now that we know that you are incompetent, we ask you at least to leave, not with dignity because you do not deserve it. We also ask that from now on, your “modus vivendi” will be “green” for all of you until the end of your days, whereby you heat your houses with photovoltaic, and if there is no sun, that you go outside and blow on the wind turbines in your houses to turn on the lights, and if blowing is not enough, that you pull the water mills like mules.

The EU now has a large trade deficit in chemicals with China as the energy crisis hits the European chemical sector hard. pic.twitter.com/fskI7ZPrIJ

What you wanted for the Europeans, is what I want you to experience. Meanwhile, the rest of us will continue to pay both the unaffordable electricity and gas bills and the savage taxes to pay for all the deficits and debt that you have left us.