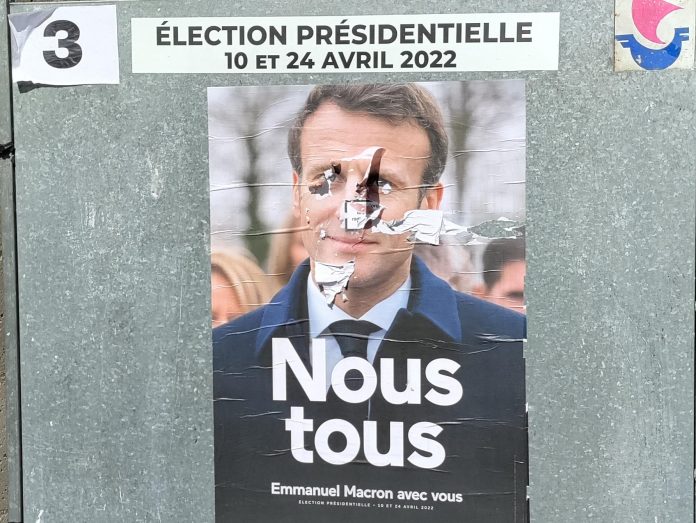 French President Emmanuel Macron managed to do slightly better than expectations in yesterday’s first round in France’s Presidential election, but a closer look reveals there was a true voter revolt.

This is not merely a repeat of the 2017 Presidential election, which saw establishment candidate Macron, a former socialist Minister who had formed his own party, facing off against Marine Le Pen, who then barely stood a chance to win. This time around, Le Pen, who has strongly moderated both her tone and programme, as a means to “detoxify” her party, having long dropped her opposition to both the euro and the EU, can actually win. 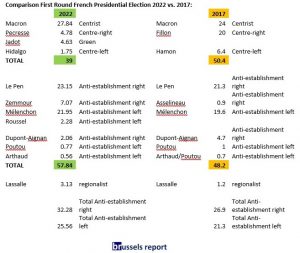 Clearly, the yellow vests protests, the Covid crisis, energy worries and inflation troubles have left their mark. Macron did manage to increase his voting share, even securing the best first-round score for an incumbent French president since François Mitterrand in 1988, but this comes at a  high price for the centre-right in particular, whose candidate, Valérie Pécresse, obtained less than 5 percent of the vote, down from 20 percent for her more rightwing predecessor François Fillon five years ago. One of the consequences is that the centre-right party won’t be entitled to reimbursement of campaign expenses from taxpayers, forcing Pécresse to openly issue a call for financial support.

Noteworthy is also how mainstream forces are relying on mainly older voters.

🇫🇷 The demographics of this election are quite something. Only voters above 60 and pensioners put Macron first. Blue-collar workers massively in favour of Le Pen. pic.twitter.com/QVVyKwVCyb

Furthermore, the divisions are also regional:

Turnout was at the second lowest point ever, with 25,24 percent of voters not bothering to turn up – and it can be safely assumed, from experience, that very few of them will turn up for the second round. Even if the 22.2 pct turnout of 2017 was even lower, it remains below the previous record of 28.4 percent of 2002, which witnessed Marine Le Pen’s father making it to the second round.

While the other anti-establishment candidates – Eric Zemmour and Nicolas Dupont-Aignan – on the right have endorsed Marine Le Pen, Macron cannot enjoy the same kind of support from the anti-establishment candidates on the left. Yes, Jean-Luc Mélenchon, who convinced 22 percent of the electorate, has called for “not giving a single vote to Marine Le Pen”, but many of his voters may well interpret that as an instruction to stay home, not to come out and vote for Macron.

Opinion polls now show a neck and neck race between Macron and Le Pen, with one new opinion poll last night putting it at 51 vs. 49 percent. 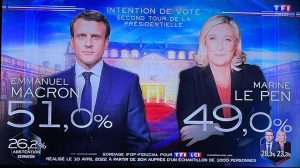 Macron of course remains the favorite, but even if he gets out all of the mainstream 38.7 percent to vote, this is unlikely to be sufficient to win. He will need to convince a sizeable degree of Mélenchon voters, without thereby scaring off his own base. That may be a tough circle to square, as Mélenchon has a rather ambiguous stance towards Russia. Already before the first round, Macron has been pandering to the left, for example borrowing the slogan “Our lives are worth more than their profits” from hard-left activists.

A big debate between Macron and Le Pen is scheduled on 20 April. Five years ago, Le Pen’s lacklustre performance is seen to have contributed to her defeat, which then was pretty certain anyway. Now she mainly seem on a mission to continue her bid to “detoxify”. In her victory speech, yesterday, she did not even once allude to immigration, which is her number one policy priority.

For years, she has also had a leftwing economic agenda, which may make her more palatable to Mélenchon voters than Macron, who’s associated with – rather unsuccessful – attempts of liberal economic reform. Then already in the first round, Le Pen was more the candidate of ordinary workers than Mélenchon ever was.

On average, Jean-Luc Mélenchon does worse where there are more manual workers (the Seine-St-Denis (93) is a big outlier here) pic.twitter.com/opvh9MJxfh

Clément Beaune, the French Secretary of State for European Affairs, thinks that “Europe” will be one of the major issues in the period between the two rounds. Indeed. If Le Pen succeeds, given Le Pen’s recent more hostile attitude towards Putin, not so much the Western policy towards Russia but France’s EU policy may feel the change. The tremors would be felt throughout the EU policy establishment. However much she may have moderated in tone when it comes to “Frexit”, it is clear that it will be over with business as usual in Brussels, for a start with the EU’s grand green plans, that were in jeopardy anyway. And even if she loses, Macron may well decide against pursuing the agenda of ever more EU centralization.

It would be good for Germany and other EU member states to pay close attention, given also there, we can see the same kind of anti-establishment sentiment. Ignoring it, and doubling down on grand plans involving ever more concentration of money and power at the EU level would therefore be unwise. From the gigantic jointly financed EU recovery fund over ever more expensive and experimental green policies onto an EU minimum wage, to joint EU arms purchasing: deciding new projects like this will become very difficult under a Le Pen Presidency.