Home European Union Interview with French economist Pascal Salin: “A tax on corporates is a tax on...
Twitter 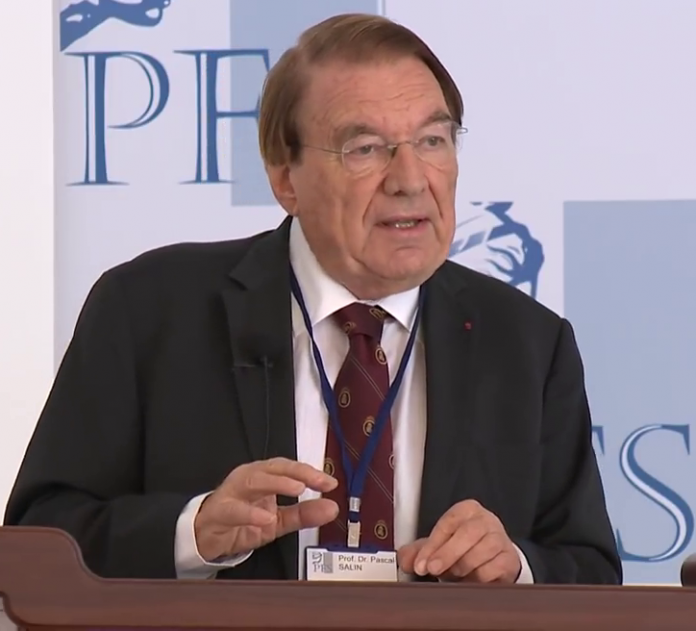 Pascal Salin (born in 1939) is a prominent French economist, professor emeritus at the Université Paris-Dauphine and a specialist in public finance and monetary economics. He is a former president of the Mont Pelerin Society (from 1994 to 1996), which is the most prestigious international network of academics promoting free enterprise and individual liberty. In 2020, he published a new book, “Tax Tyranny”, which highlights the dangers high taxes represent to the economy as well as the risks of government control.

He’s interviewed exclusively for Brussels Report by Lorenzo Montanari, Executive Director of the Property Rights Alliance (PRA), as the first interview in a series of prominent European supporters of free market economics:

Lorenzo Montanari: During the recent G20 meeting in Venice, it was agreed to adopt a global minimum tax of 15 %, something which has also been elaborated by the OECD and has been backed by the G7 and by 130 countries representing 90 percent of global GDP. This global levy has been pushed by the U.S. Biden-Harris Administration, in particular by U.S Secretary of the Treasury Janet Yellen. How can we relaunch our economy when world leaders are abandoning tax competition, as a result of the implementation of such a global minimum tax?

Pascal Salin: This proposal for a global minimum tax must be considered as absurd from several points of view.

First of all, one must admit that competition has important positive consequences. This is true, of course, for the competition between firms, but it is also true for tax policies. Indeed, if the tax system of one country has better consequences than the tax system of other countries, this may encourage the adoption of this tax system in other countries. However, there is one specific aspect of the global minimum tax which is particularly objectionable. It involves harmonizing corporate taxes between as many countries as possible in the world.

When it comes to corporate taxation, there are several definitions. It could involve regulating the tax base, which describes the value of all the production by a company during a certain period. Also VAT could be considered as a tax on a firm, however, since it is collected by the firm. Generally, however, “corporate income tax” is meant to refer to a tax on the profits of firms.

In all of these cases, however, the notion of “corporate taxation” should be considered meaningless. Indeed, a firm is a set of contracts, in particular contracts between employees and entrepreneurs – but also contracts with suppliers and buyers. It is not the contractual arrangement which is paying a tax, but the signatories of the contract. Therefore, it must be assumed that a tax supposedly paid by an enterprise is in fact paid by the signatories of the constituent contracts of that enterprise, in particular the employees and entrepreneurs.

As a result, employees or self-employed workers are only subject to income tax, while entrepreneurs are subject to two taxes – corporate tax and income tax. This tax duality is unfair, and it risks reducing the incentives for entrepreneurship, which is harmful to everyone.

Pascal Salin: France is one of the countries with the highest rate of both public spending and taxation. As taxes are destroying incentives to engage in economic activities – incentives to work, to develop an enterprise, to innovate, to save, etc. – during many, many years, France has seen a very low rate of economic growth and a high rate of unemployment.

Lorenzo Montanari: What do you think should be the priority of the government of France in terms of EU policy?

Pascal Salin: I think that it should not be a priority for the French government to try to shape a new organization of the European Union. In fact, most French politicians have always considered that European integration implied the development of a European government, as if Europe was a country.

Lorenzo Montanari: Recently, you have published “Tax Tyranny”, which is a very interesting and compelling book about the risk of high taxation. Could you articulate some of the main points?

The book “Tax Tyranny” does not aim to provide a description of existing tax systems, but it aims to provide readers with an intellectual framework which make easier for them to understand the role of taxation in the operation of economic systems and to evaluate taxes on how fair they are.

The book begins with a general analysis of the economic effects of taxes, by stressing that they diminish the incentives to create, to work, to save or to invest. It also stresses the fact that it is not sufficient to care about the overall burden of taxation in a country, but that it is necessary to do a rigorous analysis of how specific taxes function.

For example, it explains why the progressiveness of taxes, inheritance taxes or wealth taxes are not a good idea, why it is wrong to say that firms are paying taxes, why a value-added tax must not be considered as a tax on consumption – contrary to what is usually said – but as a tax on the incomes of the owners and operators of a firm, and why individuals are bearing a greater tax burden than it may appear.

The book also looks at the role of States. It is based on rigorous economic theory, but it is accessible to everyone, because it avoids overly sophisticated language and an overly technical approach.