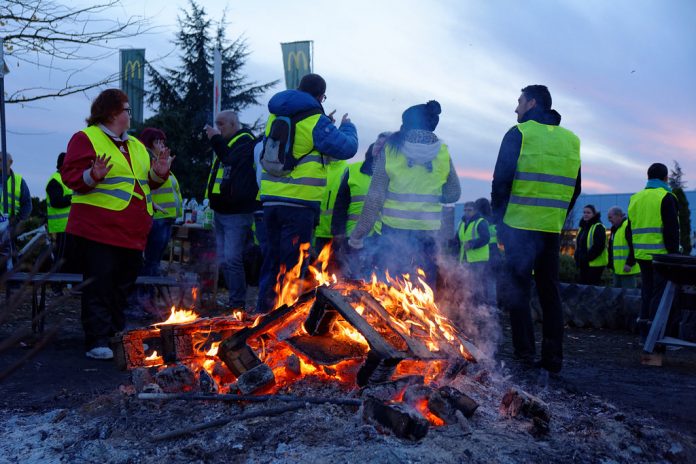 A new study by French think tank Institut Économique Molinari and Americans for Tax Reform Foundation provides a new country-by-country comparison  of the tax burden on global workers. The ranking “aims to create an ‘apples to apples’ comparison of tax rates, with data that reflect the reality experienced by real, working people around the world”, to be able to properly compare the annual “tax freedom day” for each country.

“Workers in France and Austria are the highest-taxed – not only in the European Union but among the full group of 34 global countries studied.” Read the 2021 edition of The Tax Burden on Global Workers: A Comparative Index here: https://t.co/HdVS1IsdCq pic.twitter.com/clrj56IVgs

EU member states occupy all the top places in the ranking, as only workers in Cyprus, Malta, Ireland, Bulgaria, Lithuania, Denmark and Estonia can start working for themselves from June on, just like workers in the UK, Australia, Brazil, Japan, the United States and South Africa.

Belgium is third, now for the fourth consecutive year, celebrating its tax freedom day on July 15th, as a result of its “tax shift” reform. Only a few years ago, this took place on August 8th.

Also Greece’s tax freedom day has moved forward, from July 10th in 2019 to June 22nd last year, and now to June 14th in 2021. This due to payroll tax cuts implemented by the Mitsotakis government that was elected in 2019.

The ranking looks at how long workers need to contribute in order to finance not only their taxes but also social security charges, while it also takes VAT into account, noting:

“In five countries, more than half of work-related income is collected in taxes and social charges: Austria, France, Belgium, Italy and Germany.”

It highlights that any 100 euro received by a worker in Austria ultimately involves paying another 121 euro in taxes or social contributions in Austria, another 120 euro in France and another 117 in Belgium: 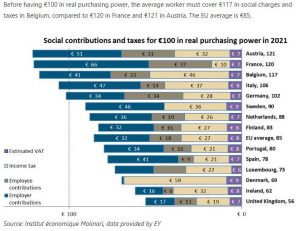 In this respect, the think tank also highlights how in France, “social charges alone (€26,229, the highest in the EU) are higher than real purchasing power (€25 466, ranking 11th in the EU)”, which is what’s left of income after taxation, also noting that these social charges “amount to 103% of purchasing power. This is the record among countries in the EU 27, where the average is 51%.”