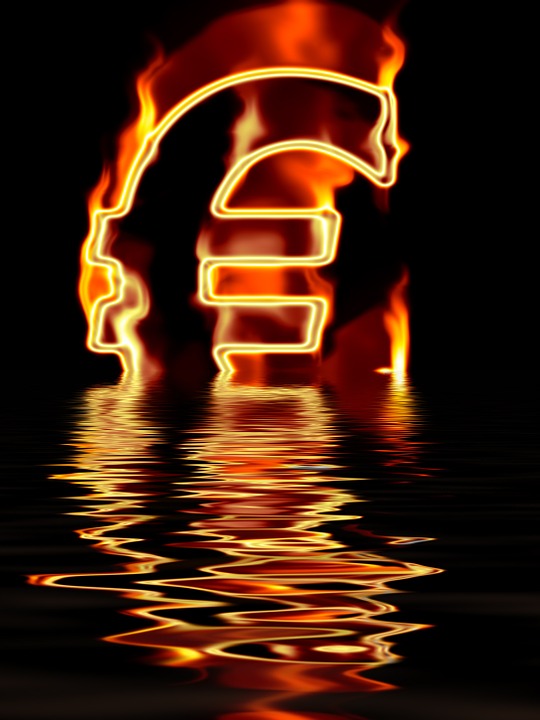 By Fabian Wintersberger, Rates Trader and Economist, based in Austria

At the end of May, I wrote an article on Brussels Report to argue why the ECB is wrong to assume inflation would be transitory. Back then, Eurozone Inflation just accelerated to 2 %, meeting the ECB’s target for the first time since 2018.

In May, ECB President Christine Lagarde stated that these price increases were largely temporary due to base effects and that the ECB didn’t mind about these price increases, as inflation would quickly reduce in 2022. ECB executive board member Isabel Schnabel stated in May that “German inflation may reach more than 3 % this year. Back then, German inflation was at  2.5108% year-over-year.

how it started how it's going pic.twitter.com/uhXnu34Lyw

However, not only has German inflation risen above 3% – it is now at 4.5% year-on-year – but Eurozone inflation has also risen to 4.1%. While everyone thought in May that the US was an outlier when it came to high inflation, it is now clear what I argued back then: The US is front-running, and the rest of the world follows.

Even more impressive than the current rise in consumer prices are producer prices, which have risen more than 10% year-on-year in September, both in the US and in Germany. 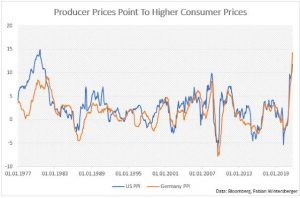 This is terrible news for central bankers, especially for ECB officials, who maintain that inflation will be transitory and that it will soon be back at pre-crisis levels. At the same time, officials from the Fed and the Bank of England have already admitted that higher inflation may be around for longer than they expected back in spring.

Christine Lagarde told the press at the ECB’s October meeting the following:

“We did a lot of soul-searching to actually test our analysis, and we are confident that this analysis of the temporality of these categories is correct and will lead to a decline over the course of 2022. Granted, it will take a little longer than we expected.”

According to the ECB, several factors are contributing to the current price increases. It claims that supply-chain bottlenecks and high energy prices the main drivers. While this is the story that Christine Lagarde and other officials at the ECB like to tell the press, honestly, it is only one part of the story.

The main driver of higher inflation has been the extraordinary expansion of the money supply since March 2020. While production was halted worldwide back then, governments and central banks made sure that people’s incomes did not fall. As a result, the supply of goods fell, while demand remained steady (as intended by those policies). As a result, prices started to rise. I have discussed this more in detail on my blog.

It should have been evident that, once an economy is switched off, problems will emerge when it is restarted. Supply chain bottlenecks are a direct result of that. What started with lumber and construction materials has spread out to other parts of the economy, from semiconductor chips to magnesium.

Problems can be observed all over the supply chains: Ports are full, prices for shipping containers have exploded, and there is a shortage of truck drivers to deliver the goods to the places where they are needed. In particular the lack of truck drivers was already a problem before the pandemic hit, but it made the situation more severe.

The labor market is also experiencing shortages because many people do not plan to return to their previous jobs and look for jobs in other sectors of the economy. To attract those people to return to these sectors, employers will need to offer higher wages. That’s another contributor to rising prices, pushing up inflation. Additionally, more and more European countries want to implement vaccine passports, which may exacerbate the problem.

The next problem on the horizon is energy. Energy prices have exploded in recent months, from gas over oil to coal, and not only in Europe but in all parts of the world. France has already introduced a price ceiling on gas and energy prices, and other European countries are likely to follow. However, this will not solve the problem of rising prices. It will only exacerbate the problem further.

While Russia has stated that it will now start to deliver more gas to Europe, the numbers are still not showing that. Gas flows from Russia to Europe are still very low. Again, less supply and more demand (due to the coming winter) will result in elevated prices. Therefore, it may take some time until the situation relaxes.

While policymakers seem to be worried about increased gas prices, they are not very concerned about increased oil and coal prices. As we all know, the EU plans to make the EU carbon neutral by 2050 and therefore welcomes the fact that carbon energy gets more expensive. German economist Marcel Fratzscher already tweeted that rising oil and coal prices are reasonable to push this transmission forward.

However, there is a severe problem behind this, and Fratzscher totally neglects it: Energy is one of the main contributors to production costs. This means that rising energy prices do not just increase the cost to drive your car or heat your house; it makes everything more expensive.

Furthermore, the EU is neglecting nuclear power in the context of the green transformation of the economy, despite the fact it may be the best chance we have to bring carbon emissions down. As a result, many producers may not have any other choice than to use “dirty” energy for production.

Higher energy prices may already have lead to food inflation: The Western Europe Ammonia CFR Spot price has roughly tripled since 2020. Therefore, food prices, which are already at a high level, will have additional room to increase. 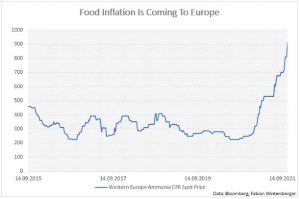 In contrast to what ECB officials are saying, I heavily doubt that these problems will end soon. On the contrary, the EU’s policy reactions are likely to create more price pressures in the future. With more and more central planning of the economy, especially when it comes to the green transition, the EU will put more fuel to the fire. The inflation spike may be far from over, despite what the ECB claims. If food prices accelerate further, the green transition and Covid will no longer be our most significant problems.

Check out the seventh episode of the Brussels Report Podcast!