By Antonis Giannakopoulos, an economics student at Athens University

Since the start of the pandemic, we have witnessed major imbalances to supply and demand in global markets. Supply chain disruptions, resulting from lockdowns and other regulations, restrictions on travel and trade, and businesses shutting down. At the same time, there was a negative demand shock in air travel industries, restaurants, tourism, movie theaters, etc. Therefore, the rapid price adjustments – especially for products that we use every day – should not come as a surprise to us. 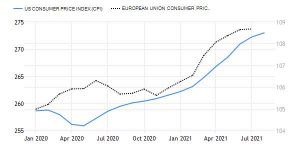 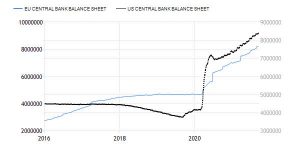 Government spending to GDP levels increased sharply both in the U.S. and in the Eurozone, in a bid to counter falling aggregate demand. This of course caused huge budget deficits and an explosion in public debt.

There is also a wide-spread belief in the markets that central banks will continue to follow relatively easy monetary policies, which markets think will be combined with an extension of fiscal measures, justified on the basis of a slower recovery.

Both in the EU and the U.S., inflation is exceeding the targets set by the central banks, as there is a risk inflation may climb even higher if action is not taken immediately. 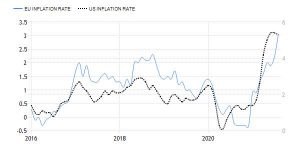 Both in the U.S. and in Europe, policy makers have warned about future inflation rates being higher than forecasted. Things may get even more tricky, given Fed Chair Jerome Powell’s willingness to tolerate an inflation target higher than the traditional 2% for an unspecified amount of time. Since the 2008 financial crisis, independence of central banks has withered, even if their powers are greater than ever, as no regulatory constraints are in place to keep monetary policy in check.

Annual inflation of 3 or 4 or even 5% may seem low to some, but as former Fed chairman Paul Volcker (picture) once wrote: “A 2 percent inflation rate, successfully maintained, would mean the price level doubles in little more than a generation”, thereby denying that the 2% inflation target meant price stability.

Almost 50 years, ago in 1971, U.S. President Richard Nixon imposed wage and price controls for the first time since WW2, hoping that this would contain inflation. However, between 1971 and 1974, the Wholesale Price index (WPI) increased at an annual rate of 12% and the Consumer Price Index (CPI) at a rate of 7.2 %.

After the end of the Nixon program, in 1974, inflation fell, but in 1978, there was another increase, this time under the Carter administration, which announced a new set of voluntary wage and price controls in October 1978.

In the end, only the massive hike in interest rates, implemented by Fed chairman Paul Volcker from 1979, was capable of stopping inflation, at the cost of a short, deep recession. 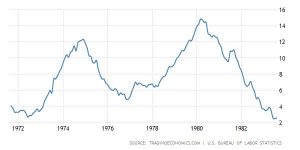 The causes of inflation

Before discussing the usefulness of wage and price controls, it is important to understand the causes of inflation. Increases in aggregate demand – via increased government spending – and aggregate expenditure – meaning, faster than the increase in goods and service – can only happen when the money supply is larger than the demand for it. These can only happen when production is not expanding in line with the increase of the money supply. Milton Friedman famously won a Nobel prize in economics for demonstrating that there was a correlation between excessive money supply, compared to output, and a general increase in price levels. He summed it up by saying that “inflation is always and everywhere a monetary phenomenon”

The economic case against price controls

Economists generally agree on very few things, but the economic case against price controls is one of them.

The first consequence of such controls are shortages, especially if the controls are kept for a long period of time. Then, price controls  cause widespread economic damage.

There is a reason why Nobel winning economist Friedrich August von Hayek described the free price system as a miracle, because it functions as a signal, providing information to both buyers and sellers on the scarcities of products in the marketplace. When prices are manipulated, these signals are also distorted and companies do no longer have an incentive to increase supply, due to the reduced profit, or they abandon production, thereby paving the way for the creation of black markets.

Prices inform everyone about what consumer need and how much they are willing to pay for it. At times of high uncertainty, prices discourage hoarding.

The very existence of profits tends to bring prices down in the long run, because they provide incentives to entrepreneurs to produce more. This increase supply and may even reduce costs, due to economics of scale.

Secondly, price controls or anti-gouging laws also discourage innovation and can sometimes cause supplies of goods and services to be directed to foreign markets where these controls don’t apply.

As a result of the very basic economic law of supply and demand,  artificially suppressing rising prices will result in reduced supply.

In sum, the imperfections of the price system do not justify control of it by central planners.

Tackling the real causes of inflation instead

Price controls divert attention from the real causes of inflation and provide excuses to avoid structural reforms in the economy.

It is true that to fight inflation is not an easy task and that tight monetary policies will lead to unemployment in the short term. However, this is needed, just like government spending cuts.

It is also true that businesses that granted large wage increases due to inflation expectations would be in a bad situation. However, like most of our other problems, inflation is made in D.C. and in Frankfurt. Any responsibility for the damage therefore lies with the Fed and the ECB. They are responsible for excessive growth in money supply and there is no other way to solving this challenge than by making sure money supply growth is brought back in line with economic growth.

Economists agree that price controls cause uncertainty and prevent businesses from expanding operations and production. While price controls can put a short time freeze on prices, after they are ended, inflation tends to bursts up, resulting in higher prices in the long run.

As Eamonn Butler and Robert Schuettinger write in their book “forty centuries of wage and price controls”:

‘’If a historian were, to sum up what we have learned from the long history of wage and price controls, he would have to conclude that the only thing we learn from history is that we don’t learn from history.’’ 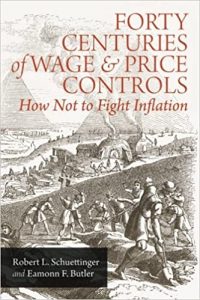